The Thomas Ranch property comprises nearly 38 acres of land and is located in the City of Corona at the intersection of Serfas Club Drive and Palisades Drive. Most of the subject site is situated within the former boundaries of a broad, northwest-flowing, intermittent stream course referred to as the Wardlow Wash. The original natural topography of the subject site has been extensively altered as a result of various flood control improvements starting as early as the 1930’s and with waste disposal activities in the early 1940’s. More recent environmental remediation activities, sewer line installations, and adjacent site developments have also contributed to modifications of the natural site topography within the site. Current topography within the site varies from gently to steeply sloping. 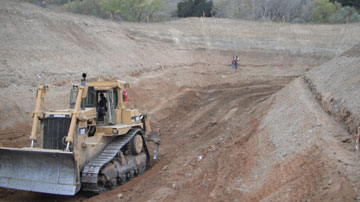 Nearly the entire site lies within the boundaries of an Earthquake Fault Zone associated with the Chino fault. Earthquake Fault Zones are delineated by the state of California to define areas where fault rupture hazard investigations are required prior to building structures for human occupancy. California Certified Engineering Geologist from Albus & Associates carefully coordinated a specific investigation developed to maximize results. 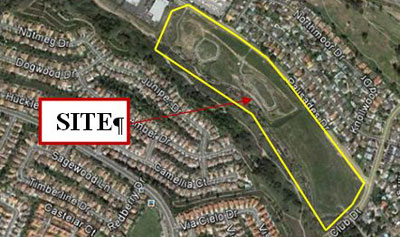 The key investigative approach to the field investigation was to initially locate evidence for faulting in the subsurface through non-destructive, qualitative and quantified, geophysical analysis which could then be correlated through a specific subsurface exploratory drilling program. If evidence of faulting was established with the geophysical work and our exploration drilling, we would then be able to confirm our geologic interpretation and the presence of faulting through deep trenching at a predetermined location. If faulting could be confirmed, the trench would have sufficient depth to evaluate fault “activity” as defined by the Alquist-Priolo Act.

Our research and review of historical stereographic aerial photographs, geologic publications and maps provided the initial framework for assessing the location of the Chino fault within and/or immediately adjacent the southwest boundary of the site. Evidence of the suspected Chino fault location was further supported through our geophysical study and supplemental exploratory drilling work. Physical and tactile methods of fault identification were later confirmed through exploratory trenching in the southwesterly portion of the subject property and our geologic mapping performed in Wardlow Wash northwest of the site. The findings of our study identified a relatively narrow “active” fault zone that was precisely located with GPS survey control. As such, building setbacks were minimized as a result of our diligent efforts.

“Building Relationships to Build the Future”